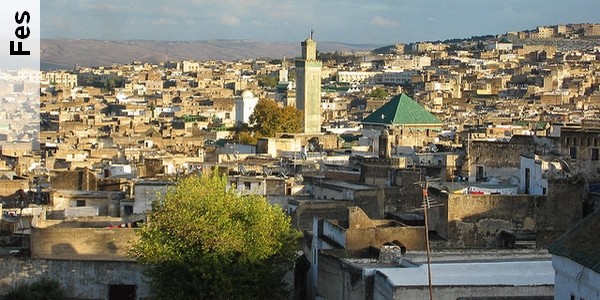 Fes, Morocco's oldest Islamic city and third largest after the capital Rabat and the commercial hub Casablanca, it is a 1.200 years old living museum of historic hispano-Arabic culture and architecture that blends harmoniously with the cosmopolitan edge it has enjoyed for centuries. It sits on a plain overlooking the Middle and High Atlas region, which has become a heaven for trekkers and winter-sports.

The city has two old medinas, the larger of which is Fes el Bali. It is listed as a UNESCO World Heritage site and is believed to be one of the world's largest car-free urban areas. Al-Qarawiyyin, founded in AD 859, is the oldest continuously functioning madrasa in the world. The city has been called the "Mecca of the West" and the "Athens of Africa".

Bab Boujloud or the blue gate of Fes is the main entrance of Fes el Bali or the Medina. The Gate was constructed by the French in 1913, but in the 12th-century original -- positioned with an indirect entrance to negate battering rams -- can still be seen next to it. This spot is hive of activity and a great place to sit and watch people comings and goings, the horseshoe arches are decorated with local blue tiles on the outside and green tiles on the inside, patterned in the form of stars ..

Madrassa Bounania was built by Sultan Bou Inan in 1350, the madrasa is Beautifully decorated, as most of these are, this one follows the standard design of a main courtyard with a few alcoves off to the side. The carved woodwork and stucco are magnificent and offers a very beautiful view of Fes from its roof. To their primary role as religious schools, the madrasas functioned as important centers of community life. The courtyard, as the most public of the spaces within the madrasa. The Madrassa is open between 8 am and 5 pm except pray time and closed on Friday mornings and entrance fee is 10 MAD.

Kairaouine University, it was built in 859 by Fatima al Fehria for her fellow refugees from Tunisia, it capable of holding 20.000 people. It was incorporated into Morocco's modern state university system in 1963. It is the oldest existing and continually operating educational institution in the world according to UNESCO and Guinness World Records. The Madrasa has on the finest libraries and one of the leading spiritual and educational centers of the historic Muslim world.

The Tanneries the best to be visited in the morning, when the the pits are awash with the colours used in the tanning and yeing proccess, The rotation of colours in the honeycombed vats follows a traditional sequence – yellow which supposedly Safran, in fact turmeric, poppy, indigo, mintand antimony although vegetable dyes have largely been replaced by chemicals, to the detriment of workers’ health.