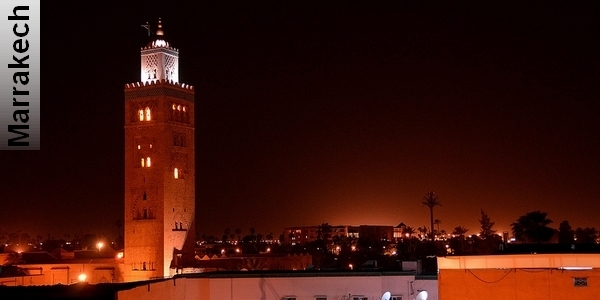 Marrakech or the ‘Land of God ‘ is the most popular destination in Morocco, the 3rd largest city in Morocco after Casablanca and Rabat. Beyond the city limits, the landscape is like Morocco in miniature, with snowcapped mountains, beautiful coastlines and only a few hours from the foot of the Sahara desert all this made Marrakech number one traveller destination.

During 1960s and 70s Marrakech was magnet city along with Istambul and Kabul in that time. Marrakech is divided into two parts, The European modern district called “Gueliz” after the name of one of the more popular neighborhoods the other district is the historical Medina or old city full of interwining narrow passageways and local traditional shops. The red walls of the Medina contain a busy, humming core, but rarely get the sense of being suffocated by over population.

Things to see in Marrakech :

The Jemaa el-Fna Square is one of the main cultural spaces in Marrakesh and has become one of the symbols of the city since its foundation in the eleventh century. During the day it is predominantly occupied by orange juice stalls, youths with chained Barbary apes, water sellers in colourful costumes with traditional leather water-bags and brass cups, and snake charmers who will pose for photographs for its visitors. The Jamaa el Fna is one of the world’s largest open-air eateries, over 100 open kitchens are set up every night in long rows of Makeshift tables serving typical Morocco dishes.

- Bahia Palace :
The name means "brilliance". It was built in the late 19th century to be the greatest palace of its time. As in other buildings of the period in other countries, it was to capture the essence of the Islamic and Moroccan style. There is a 2 acre (8,000 m²) garden with rooms opening onto courtyards. It has been well-maintained over the past century by the Moroccan government and is currently used to receive foreign dignitaries. Part of the palace is occupied by the Moroccan Ministry of Cultural Affairs. Opening hours 8.30-11.45am & 2.30-5.45pm Sat-Thu, 8.30-11.30am & 3-5.45pm Fri . The entrance fee is 10 MAD

- Badi Palace :
Badi Palace or the incomparable palace. Was paved by Saadian Sultan Ahmed Al Mansour and financed by ransom paid by Portugal after battle of Three Kings. It was reputed to be one of the most beautiful in the world, it included marble from Italy and other precious building materials from as far away as India. Unfortunately the place is now largely a ruin and what remains is essentially a huge square surrounded by devastated walls enclosing a sunken orange grove and a number of modern concrete pools, when you’re inside you’ll notice Koubba Al-Khamsinyya which is a large structure to the west, it was used as a great reception hall on state occasions and was named after its 50 marble columns. Opening hours 8.30-noon & 2.30-6pm and entrance fee is 10 MAD.

- Saadin Tombs :
Date back from the time of the sultan Ahmad al-Mansur . The tombs were discovered in 1917 and were restored by the Beaux-arts service. The tombs are magnificently decorated with colorful tiles, Arabic script and elaborate carvings.been a major attraction for Marrakech guests.There are tombs of over 100 more Saadian princes and members of the royal household, including a few Jewish graves. The gravestones are covered in brilliantly colored tiles and most have inscriptions with epitaphs and quotes from the Qur'an. The building is composed of three rooms. The most famous is the room with the twelve columns. This room contains the grave of the son of the sultan's son, Ahmad al-Mansur. The stele is in finely worked cedar wood and stucco work. The opening hours 9am-4.45pm and entrance fee is 10 MAD.

- Menara Gardens :
A slightly more pleasant olfactory experience is provided by the several beautiful gardens which are laid out around Marrakech. Menara Garden is one of them, it’s name derives from the pavillon with its small green pyramid roof. The pavilion was built during the 16th century Saadi dynasty and renovated in 1869 by sultan Abderrahmane of Morocco. The Gardens are very accessible to the public and continue to serve as a relaxing and picturesque oasis outside of the crowded city. The Menara Gardens were listed as an UNESCO World Heritage Site, as a part of the Médina of Marrakech.

- Majorelle Gardens :
One of the most visited sites in Morocco. It took French painter Jacques Majorelle (1886-1962) forty years of passion and dedication to create this enchanting place in the heart of the city of Marrakech.

The garden covers nearly two and a half acres. Collections of cacti, exotic plants and trees are landscaped to emphasize the unique beauty of each one. The paths allow us to see how the architectural style of the villa-studio, now transformed into a museum, is set off by vibrant colours dominated by its “Majorelle blue”. The pools, streams and fountains create a haven of serenity. The delicate sound of trickling water accompanies the song of the bulbul in the gardens and the chirping of numerous other species of birds who have found their Eden here: blackbirds, house sparrows, robins, blue tits, great tits, warblers, grey wagtails and turtledoves. Opening hours from 8:30 am to 5:30 pm every day and entrance fee is 50 MAD.

- Ben Youssef Madrasa :
Was an Islamic college in Marrakech, named after the Almoravid sultan Ali Ben Youssef(reigned 1106–1142), who expanded the city and its influence considerably. It is the largest Medrasa in all of Morocco. It's the oldest surviving mosque in Marrakech, however the building itself is a fairly recent date, as it was almost completely rebuilt in the 19th century in the Merenid style.