Culture and tradition in Morocco

As-Salam Alaikum is probably the first thing you should learn while preparing yourself for a Morocco trip. It is an Arabic word and a way of greeting in every Muslim or Arabic country such as Morocco, a country where its people are hospitable and cheerful. People are religious but less in the cities. They are generally very easygoing, and open minded, in the big cities you will see most young Moroccan are westernized which means women don’t wear a veil, though they may wear a headscarf, but you could still show respect for them by not wearing skimpy clothes, kissing and cuddling in public, or showing affection to each other. 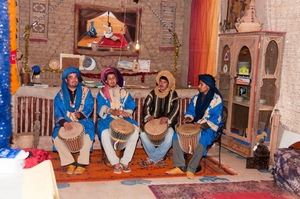 The majority of Moroccan women dress conservatively. Many women dress in clothes that do not cover their faces or hair, while others cover them and it all depends on the cities they reside in, their personal choice, or social level. A very conservative woman would wear a headscarf. The same goes for men and depending on where in the country they reside in or whether they live in a rural or urban area you will find men wearing the western style clothes or the traditional "Jalaba". 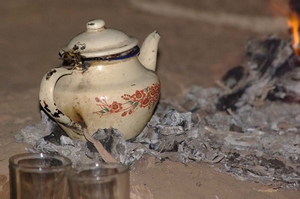 Probably the most outstanding feature of Morocco customs is that of generous hospitality. To the Moroccans, extending good hospitality is more than just an admirable thing to do--it is a matter of honor and also a sacred duty, so it very common to be invited to have lunch or a tea by somebody with the family. Do not forget to remove your shoes before entering the sitting room. You many wonder if you should bring a gift? It is certainly not mandatory to bring a gift while visiting but it is a very nice touch. Most Moroccans do bring a gift when invited for a meal. Many also bring a gift on the first visit. So, what should you bring? If you are invited for tea or dinner, dessert is a highly appropriate gift. Maybe if you are visiting an important family in the city for example, appropriate gifts include flowers, vases, and house wares, but do not take a bottle of wine or other alcohol to a Morocco home.